The Constables of Maricopa County provide the public with an efficient and timely service of process issued through the Justice Courts. These processes include:

There are 26 elected Constables serving the over 4 million citizens of Maricopa County. 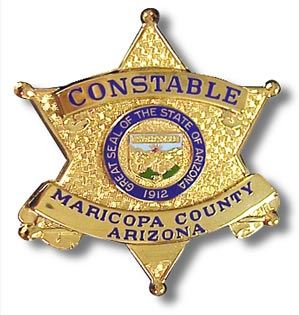 Constables’ duties include but are not limited to the following:

A part of the Arizona justice system since the territorial days of the state, a Constable is an elected officer of the county for the Justice Precinct and must live in the precinct to which elected.

State law sets fees collected by the court for Constable services. Fees go to the general fund, not to the Constable.

Constables shall attend the courts of justices of the peace within their precincts when required, and within their counties execute, serve and return all processes and notices directed or delivered to them by a justice of the peace of the county or by competent authority.

In addition to any other provision of law these duties may be enforced by the presiding judge of the superior court in the county, including the use of the power of contempt.

The Arizona law enforcement officer advisory council shall provide a training course for constables which will be provided at least semiannually. Constables shall be required to attend the next available training course subsequent to their employment.

Constables, with the consent of and at salaries fixed by the board of supervisors, may appoint deputies, stenographers, clerks and assistants necessary to conduct the affairs of their offices. The appointments shall be in writing and filed in the office of the county recorder.

The provisions of law relating to sheriffs, so far as applicable, shall govern the powers, duties and liabilities of constables.

Constables Can Save Lives

And now- Constables carry Narcan. That is a brand name of Naloxone, the drug that works to reverse the effects of an opiod overdose.

The Arizona Department of Health Services recognized the Maricopa County Constables as having a program and process in place to administer Narcan in overdose situations. The Constables and Deputies completed specialized training and just received their certification as a Public Health Excellence in Law Enforcement (PHELE) agency (PDF) Opens a New Window. .

Constables will have bottles of the nasal spray with them on the job at all times.

“These men and women see it all,” said Presiding Constable Mike Branham (Arrowhead).

Evictions, orders of protection, warrants, and more bring Constables into unexpected, dangerous situations. All can tell tales of belligerent defendants. Most have stories of weapons and drugs left behind after an eviction. And some Constables have walked in on people they were too late to help.

Narcan is another tool in the proverbial tool belt- it’s there if they need it, and they’ve been trained to use it.

Just Another Day On The Job

Thursday, June 13th was "just another day" for Constable Carolyn Lane (Arcadia-Biltmore). Well, except for the part about being on TV.

En route to serve an eviction, she asked the property owner what she might need to know upon arrival.

Turns out there were more than three dozen Chihuahuas- left behind by a man who lost his house to foreclosure. Lane called the Humane Society, which sent an animal rescue team to assess the dogs.

In the mean time, media crews came to the scene as well. Click the photo to watch the story which aired on Channel 3 news. 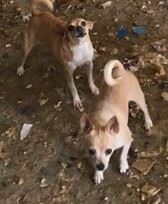